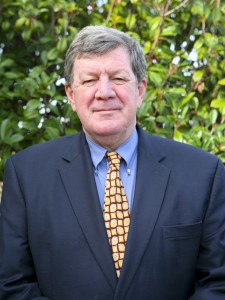 David Smythe has over 30 years experience in commercial real estate. Prior to joining CC&T Real Estate Services, he was associated with The Brumley Company. He joined CC&T in June 2000 and is a partner and Vice President with the company. He was the Broker-In-Charge until 2016.

David is a native Charlestonian and a graduate of Virginia Episcopal School, in Lynchburg, VA (1972) and Wofford College (1976). He was in the KZ Fraternity. While at Wofford, he helped start its Rugby Club in 1973. David is a past President of the Charleston Trident Association of REALTORS® (CTAR) MLS and has been recognized as a REALTOR® of Distinction by CTAR for his exceptional sales achievements and efforts in the real estate industry and community.

David’s varied community service includes working with Rural Missions, Inc., and serving on the board of the Coastal Chaplaincy and the Life Management Center, which helps coach people of all ages with ADD and ADHD. Active in St. Michael’s Episcopal Church, David has served on its Vestry and was head of its Service Commission. In 2002, he completed a five year project managing the renovation of the church’s four Tiffany stained glass windows. He served on the Board of the Charleston Neighborhood Association. David is currently involved in the Charleston Breakfast Rotary Club, and has been since its inception in 1982, serving as its President from 2000-2001, and continues to serve on its Board while also heading up the Foundation.

David’s wife, Ruthie, served as Broker-In-Charge for Louis Lane Properties where she built a career as one of Charleston’s finest residential real estate brokers. They have two children, Cord and Cate. Cord graduated from Episcopal High School in Alexandria, VA, then went on to Texas A&M at Galvaston graduating in 2005. He now runs all facets of Crover Maritime in the Charleston area. He is married to Hunter and they have a beautiful daughter, Tucker-Louise. Catherine (Cate) recently graduated from the University of Georgia and is now a Chef at Charleston’s popular Wild Olive restaurant on Johns Island, and does private catering as a side business.