$80 million Midtown project to wrap up by end of September 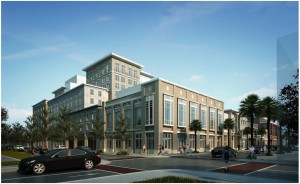 The dual-branded Hyatt hotels at Spring and King streets are now accepting guests for mid-October though they could open earlier as construction winds down on the Midtown project. Erstwhile just a block of land, now a complex which includes retail and office space on King Street.

One of the most anticipated downtown Charleston development projects in years soon will be completed.

The nine-story structure includes two hotels; an eight-level, 405-space parking deck; and buildings for shops, restaurants and offices. In all, 433,000 square feet is being added at King and Spring streets.

“We are wrapping up construction soon,” said Stuart Coleman with CC&T Real Estate of Charleston, a partner in the Midtown project.

The hotels are completed and exterior work on some additional buildings on King Street will be completed by the end of the month, said Tom Rhyne, senior superintendent with DPR/Hardin construction firm of Atlanta.

Construction on the Midtown project in downtown Charleston is expected to wind down by the end of September.

The dual-branded Hyatt Hotels will open first, followed later by the commercial areas of the project, Coleman said.

Hyatt’s website says the new lodgings are accepting reservations starting Oct. 17, but it could open earlier depending on last-minute construction, Coleman said.

The hotel ballroom will sit at the corner of Spring and King streets above an as-yet unannounced new restaurant.

The King Street property includes eight commercial tenants. One of those is The Ordinary restaurant, which opened before construction began in September 2013. Others have not been announced, including the historic building fronting on King Street that was spared.

“We have one lease signed and a couple of letters of intent,” Coleman said. “We want the right kind of retail for that area.”

Last winter, project officials said the development would be completed in the spring with bookings by mid-summer, but work on new commercial buildings along King Street delayed the opening of the hotels because Hyatt officials didn’t want guests to encounter unfinished buildings upon arrival, according to a former project manager.

When the project does open, it will include a rooftop bar above Hyatt House. A separate elevator lobby from the hotel will provide access. Patrons can enter through a pedestrian walkway off King Street or through a courtyard.

“You won’t be walking through the hotel lobby to get to the rooftop,” Coleman said.

The parking deck, when completed, will be bought by the city. It will be available for hotel patrons, retail and office personnel and the general public for a fee like other parking garages at Charleston Place or the Francis Marion Hotel.