Work begins in earnest this month on a long-delayed construction project on Upper King Street that will be anchored by two Hyatt hotel flags.

Crews are preparing to demolish several vacant structures on 2.4 acres at King and Spring streets as the $80 million second half of the Midtown redevelopment project gets rolling. Preliminary test pilings are already underway.

The project will include four new buildings totaling 433,000 square feet. Two existing structures on the site will be saved.

In addition to the 232,000-square-foot hotel, a seven-story parking garage with 400 spaces will rise on an adjacent parcel.

Freeman said the group decided to go with a dual brand of Hyatt because it’s looking to capture different types of guests. The hotels will have separate lobbies. Hyatt Place will be the bigger of the two, with 191 rooms.

Midtown, which originally included the parcel where the 200-unit Elan Midtown apartment complex is nearing completion, will be one of the largest redevelopment projects in downtown Charleston, Clement said.

“For the longest time, King Street has needed this bookend,” he said.

Evening Post Industries, The Post and Courier’s owner, also has plans for that rapidly changing area of the city. It owns about 12 acres at and around the newspaper’s headquarters, about a block north of the Midtown site. The company is proposing to redevelop the property into a mix of new residential and commercial uses, but no plans have been approved. 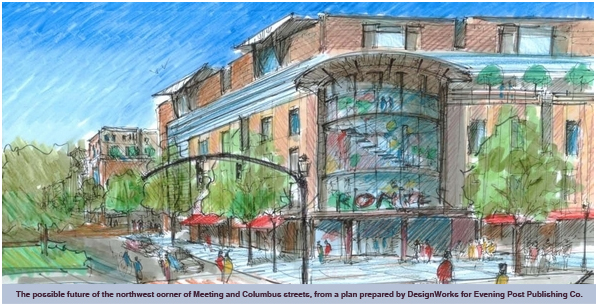